Yet another strong cold front came through the other day.  Though the wind wasn't bad the temperatures again were below sixty degrees.  Every cold front this winter has been like this.  I swear it use to be only one or two good fronts would it get this cold, but the last two winters it has been every cold front.

Despite the cold water, 60 - 65 degrees between the backcountry and the ocean side, fishing has been good. The barracudas on the oceanside flats have been very cooperative and my clients this week have had some big barracudas, pushing twenty pounds, come to the boat, along with a few smaller barracudas.  The backcountry fishing hasn't been a disappointment either with sea trout, ladyfish, pompano, jacks and plenty of redfish.

Today was no exception.  I fished with Gary and Scott from the Chicago area today as part of a three boat trip. We struggled a bit this morning when we found some baby tarpon that wouldn't eat and a couple of quality of barracudas.  We ventured out to the backcountry during the latter part of the trip and caught a few ladyfish in Jewfish Basin.  Surprisingly the water was warmer than I thought it would be at 62 - 63 degrees.  We ended the day at the 'redfish hole'.  It was like fishing in a bathtub.  Short twenty foot cast, let the bait get to the bottom and we were hooked up.  The guys caught probably thirty small redfish and this is after another boat left the spot.  We also had a double triple header with the redfish.

Thanks again guys.  We look forward to the next time.

My wife and I went out for about two hours this morning to do a little fishing. The water is still on the cool side, about 63 degrees, from another strong cold front that moved through the Keys last week. We went into one the many channels in the Key West backcountry for some rod bendin' fun. As is the norm in these channels we immediately started catching small jacks.

There are many species available in the backcountry creeks such as ladyfish, snapper, pompano, bluefish and of course tons of jacks and many others. But today we had a special surprise come to the boat, a small redfish. I stopped the boat and we fished the area to see if there were more down there. After about an hour of fishing the same spot we ended with 20 small redfish, no more than a pound or two. We left the fish still bitin', who knows how many we could have caught, but we more than happy with the outcome.

Redfish in Key West are somewhat of a rarity. There are a few guys that I know of that get them fairly regularly on the flats during the winter months. Our redfish are different than what you would see in the Everglades or other parts of mainland Florida. Our redfish are much lighter in color to almost all silver like the one shown.
Posted by Captain Mike Bartlett at 7:27 PM 2 comments

I fished with Shawn and Dwayne this past Tuesday, the day before another strong cold front moves through the Keys. It was flat calm, sunny and warm with fog on the horizon. We found a good number of tarpon rolling and even free jumping at times in a couple of channels near Key West. The tarpon were primarily solitary fish and very scattered. The incoming tide was also very weak and seemed to take forever to get moving, proving difficult to present baits effectively.

Though we didn't get a tarpon we found large areas of floating permit. There must have been thousands of permit all through the area we were fishing. We could see tips of fins and flashes all around. It took some work but we finally got a big twenty pound permit to eat, pictured below with Dwayne. Shawn was up next and after a little while he was hooked up another good sized permit. Unfortunately his permit got around something and broke off. We concluded the day with a big barracuda for Shawn.

Not a bad four hours of fishing!! 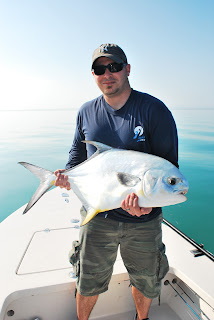 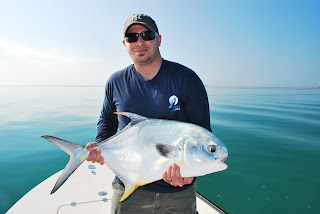 Posted by Captain Mike Bartlett at 11:12 AM 0 comments

I had the good fortune to fish with Scott and Sara from New York today. We had a beautiful day with tons of sharks and barracudas on the flats near Key West. Both Scott and Sara started the day with a lemon shark, Sara's was bigger!! We then moved to an area that traditionally holds large numbers of oversized barracudas during the winter months. We had barracudas in front of the boat for the next couple of hours and they were more than willing to eat. Scott and Sara caught several big cudas and had many follows and eats. The largest fish to the boat was over twenty pounds which is posing with Sara for photo opportunity.

Thank you again for fishing with me today and I look forward to sharing your next adventure on the Key West flats. 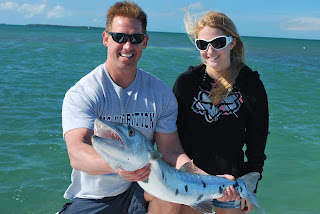 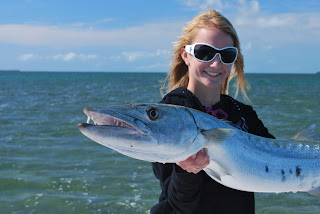 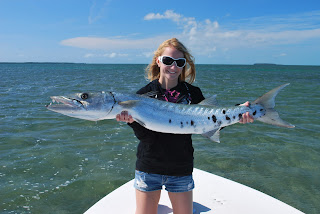 My buddy Captain Peter Heydon and I left the rock for few days of redfishing at Matlacha in southwest Florida. We had a great three days of fishing, gorgeous weather and a great time all around. We both caught several quality redfish on fly and a bunch of really nice sea trout.
A special thank you to Captain Gregg McKee of Wildfly Charters and Captain Joe Harley of Snooktown Charters for three days of great fishing and to our gracious host Bill and his wife Virginia for putting us up and putting up with us for three days and the great home cooked meals. 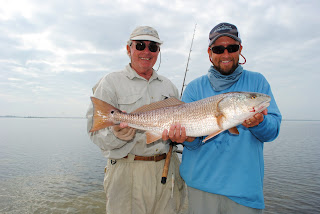 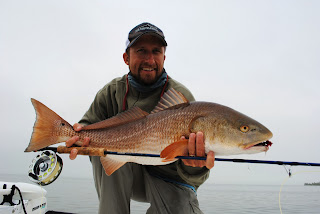 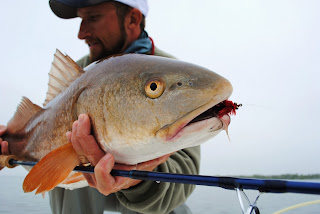