Last week I fished with Joe and his wife.  The moon was still pretty bright so we made an early morning start, 5:30am.  While it was still dark, up until the light just started to come up a little, we had tarpon popping baitfish off the surface.  Joe and his wife landed a double header, both tarpon being close to twenty pounds.

After sunrise we set off for tailing permit and bonefish.  After a lot of searching I finally found some bonefish and Joe caught a couple small ones.

We stayed out to get Joe a permit to complete the slam.  We had a lot of shots at tailing permit, but unfortunately the wind dropped to nothing and the permit proved to be extremely spooky.  Often taking off when Joe would cast or when the crab hit the water.  I  was surprised the permit were letting us get close enough.  Many times when water is flat like glass we can't get anywhere near a permit in shallow water. 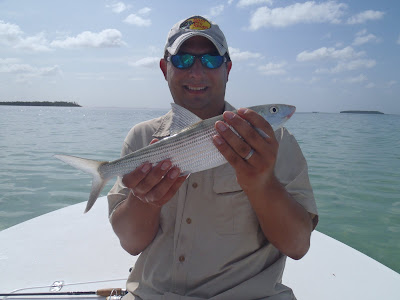 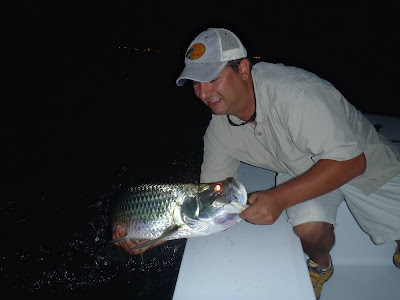 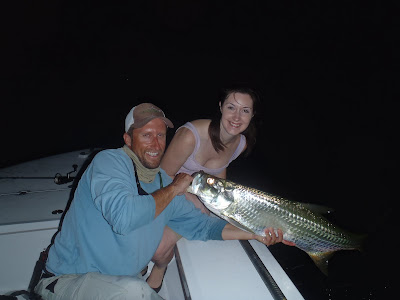 What do fishing guides do on a day off, they go fishing!!!!  I hooked up with Captain Rob Kramarz and Captain Derren Doop.   I met them at Sugarloaf Marina on Sugarloaf Key the other morning.  We fished the backcountry flats for tailing permit and bonefish.  It was slick calm and tough to get close to fish but we managed a couple of nice bonefish like the one pictured below with Captain Rob. 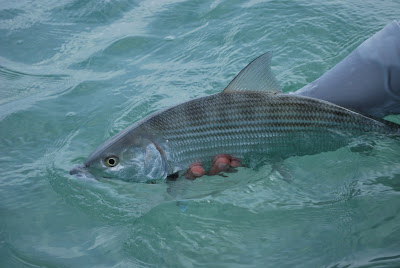 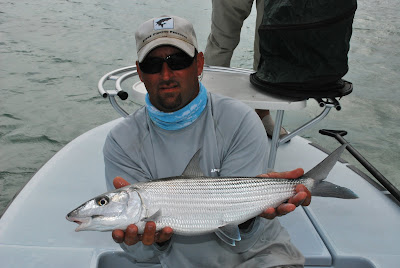 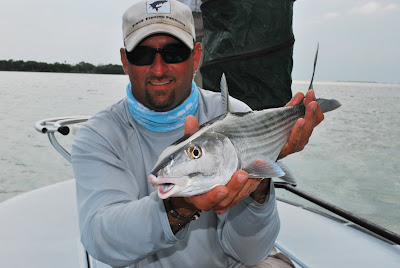 I took a little vacation last weekend north to southwest Florida, specifically Estero Bay and Matlacha, for a few days of fishing for redfish, snook, trout and tarpon.

The trip started last Thursday in Estero Bay fishing with my buddies Captain Ward Kowalyk and Captain Brad Brown on Ward's 21' Hewes Redfisher.  We set out early in search of white baits and after about thirty minutes or so we had a live well full of pilchards and small pinfsh.

Tossing the baits in the shadow of the mangroves under a cork was the preferred presentation which resulted in several snook, a couple of redfish and sea trout and a flounder.  We ended the day with a triple header of 6 - 8 pound Crevalle jacks.

Day two, friend Captain Gregg McKee joined me in Estero Bay with Captain Ward.  After a good breakfast at Mar LiDa's Diner we hit the water.  Ward made quick work again getting the bait for the day and off went to fish the bushes.  We started of with two slot redfish which we invited to dinner and another undersize red.  Gregg pulled the hook on a giant snook and we caught a couple of nice jacks and small snook. 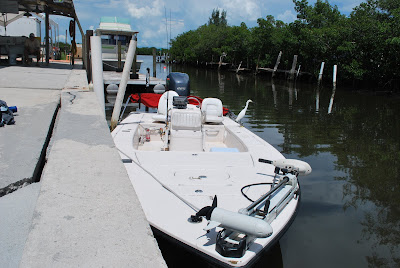 Day three and four were spent at Matlacha with Captain Gregg McKee.  We only fished a short time Saturday as Gregg had a trip in the morning, but we did pick up a couple blue crabs from his crab trap and rebait them with ladyfish.  Sunday we spent the morning chasing schools of baby tarpon.  It was flat calm and hot which is great when looking for rolling tarpon.  We fished three areas and found tarpon on each flat.  We ended the day with three tarpon to the boat, jumped two and had about ten swipes or grabs at our flies.

I spent Sunday evening with Gregg, his wife Amanda and baby girl Sophia slopping down blue crabs for dinner at his parents house.