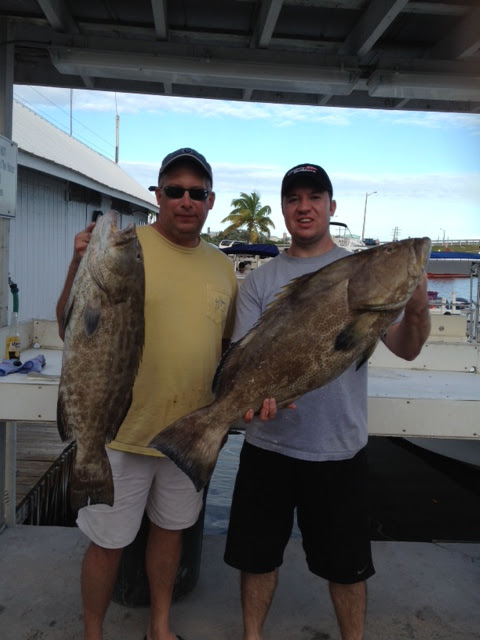 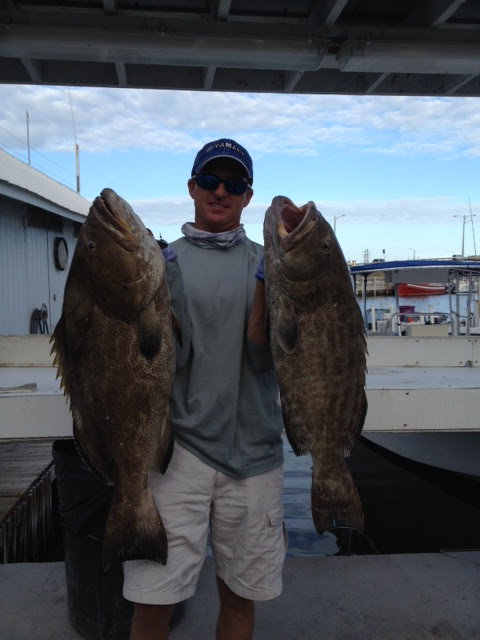 After another week of wind and cool weather the winds again turned toward south and the temperatures rose ahead of the next cold front that pushed through the Keys last night.  I fished with Dino and his wife Courtney from Naples, FL yesterday and the pre-frontal bite was on.  We started out a little slow in the morning but as the day progressed and the tide pushed in, fishing got better.  We found plenty of barracudas but we had some bad luck with a bite-off and a couple of complete misses.  We found a few permit, though I thought we would have seen more, getting pretty good casts off to two of them which unfortunately resulted in spooked fish.

Toward the end of the trip I finally found some sting rays that had jacks following them, thanks to my buddy Capt. Peter Heydon for the heads-up.  Dino had several shots and in the end got three jacks to the boat the largest about 10 pounds.  We stayed out an extra hour, the weather was good and I really wanted get Dino another shot at a permit or barracuda.  He mad some really good casts to fish, he just had a little bad luck.  I pushed along the last flat of the day not seeing anything until almost the very end when we drifted over a barracuda that shot out from under the boat.  Luckily the cuda stopped and again Dino made a good cast.  This time the cuda did what a cuda is supposed to do and ate the tube lure.  A few minutes later Dino has his first ever barracuda to the boat, a chunky 15 pound barracuda.  We'll get that permit next trip. 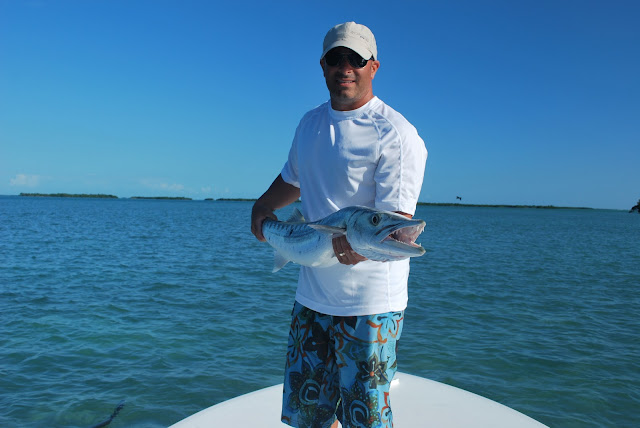 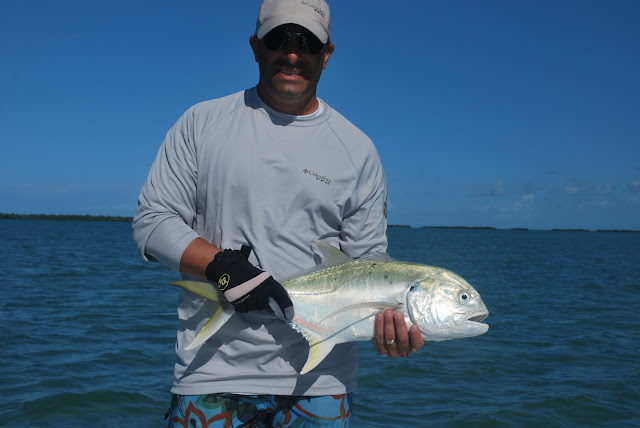 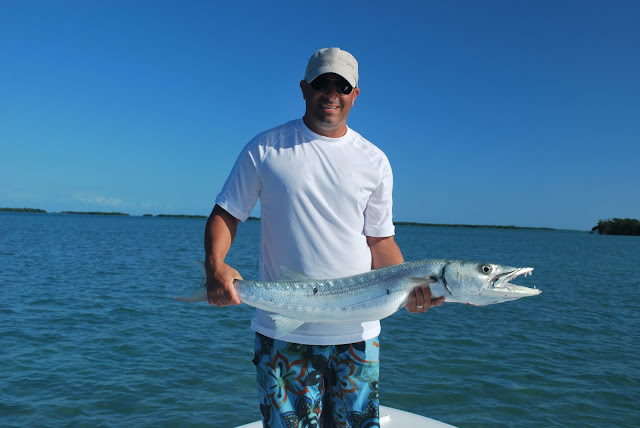 I fished with Erin and Scott from Pennsylvania this morning.  The weather for once has taken a turn for the better and the fishing was just as good.  The winds have come down some and out of the southeast.  This wind shift results in a warm breeze and the water, which was cooled by the latest cold front, will warm quickly.  We had a pretty clear sky and good visibility.

There were plenty of rays roaming the flats with most of them accompanied by Crevalle jacks.  Erin was on point for the jacks and she managed two nice jacks to the boat one about ten pounds.  We saw few big barracudas lying in wait and Scott got a big 20+ pound fish to the boat and had another large cuda jump off later in the trip.  This turned out to be good.  Just as we got organized to continue down the flat I spotted a big permit working down the flat.  Scott made a great shot and about 20 minutes later he landed about a 20 pound permit.  A great end to a great trip. 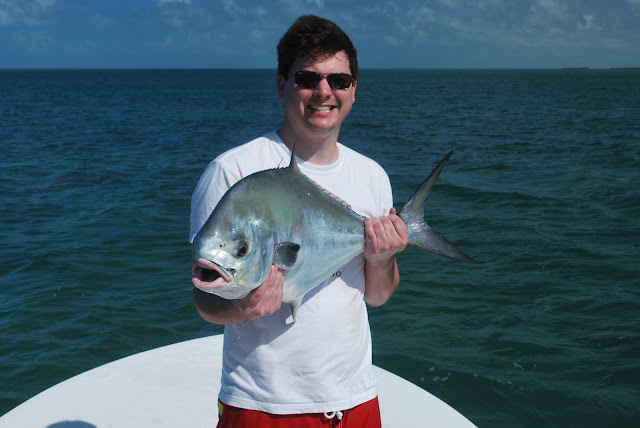 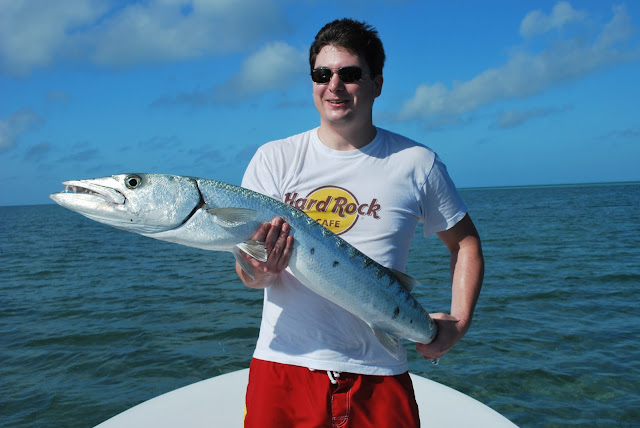 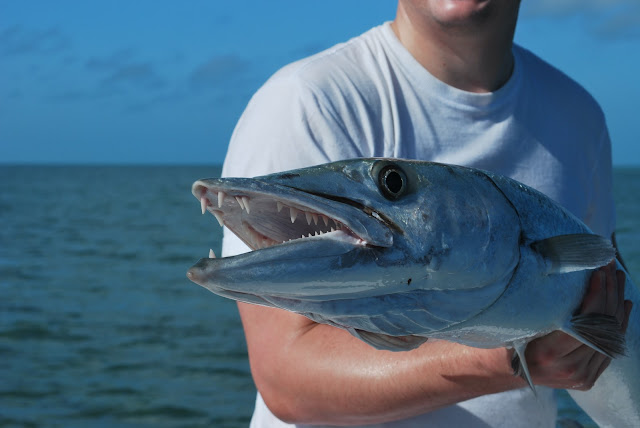 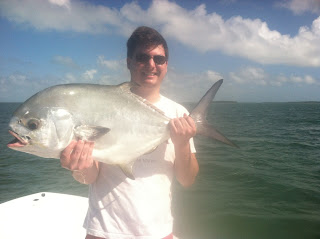 Finally, after what seems like forever, the weather is finally cooperating so we can effectively fish the flats.  With lots of wind, clouds, cold fronts, cool and muddy water lately; things have finally returned to normal and the flats are clean and the sky clear.  We've been seeing and catching the usual suspects this time of year on the flats which include big jacks on rays, sharks and permit.  The barracudas are slowly making their way back as well, we had shots at a few large barracudas the last two days.  Conditions should improve this week as the winds shift more east and air temperatures raise a little into the lower 80's.

Myself, Captain Peter Heydon and Captain Rob Kramarz fished the last two days with a group of guys from Ohio.  The guys were great and pretty much up for anything.  We did a little backcountry fishing for the winter species and had some fun doing that, but most of the time was spent on the flats where a few big lemon sharks were caught, plenty of big jacks off the backs of rays, one big permit was caught and a bonefish this afternoon. 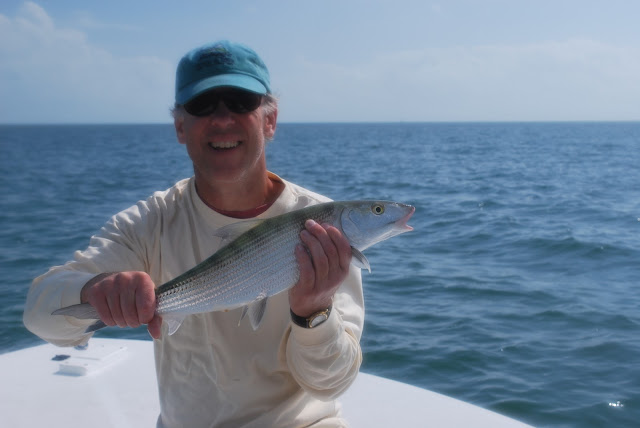 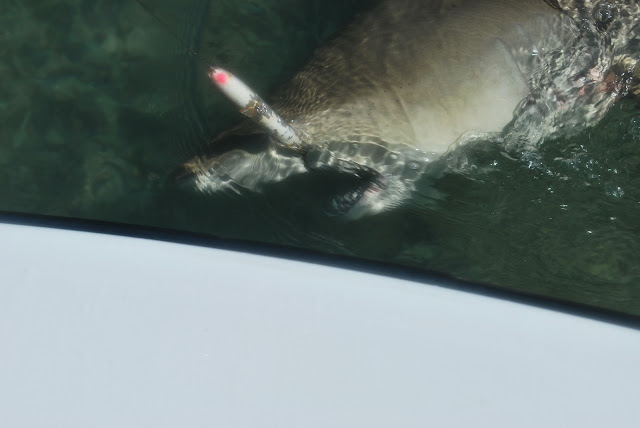 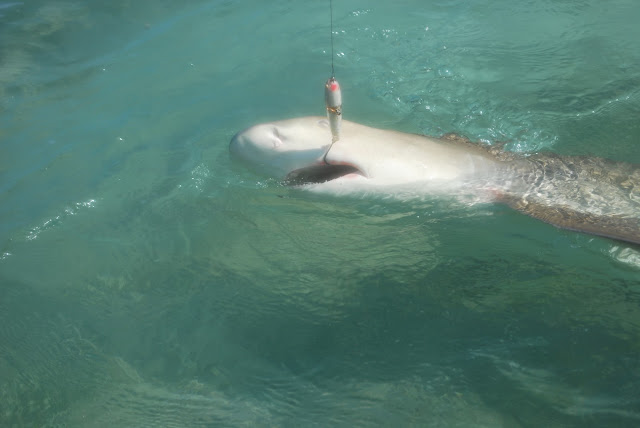