Wednesday morning I fished with Travis from Texas.  Travis does a lot of flats fishing back home for redfish and trout, so I knew we were in for a good day as long as the fish cooperate.  It's always a treat for a guide to fish with an angler who has a lot of experience on the flats.

Our day started out windy and cloudy, not ideal.  We found a couple baby tarpon with one eating a soft plastic, but we didn't get the hook up.  As the tide dropped in the back country east of Key West, I took us to a few of the flats that have producing good numbers of bonefish.  We did manage a couple of shots at bonefish, but the fish spooked to my surprise.


We moved to the Gulfside flats to look for tailing permit.  As we poled along I noticed a large tarpon cruising  over the white bottom just off the flat.  Travis cast his crab meant for permit to the tarpon.  At first we thought the big tarpon turned away until the line came tight and a severe bend appeared in the medium light action rod.  I told Travis this isn't going to last long with a 1/0 hook and I just happened to have a section of 30# leader attached to the small hook.  I was hoping to get a jump out of the tarpon and that would be the end of it.


Amazingly the big tarpon stayed connected after the first jump.  We chased the fish around for probably 15-20 minutes and was able to run up on the tarpon to get some photos and get the leader in the rod tip for a leader release.  Since we couldn't put a great deal of pressure on the fish and she was heading for the middle of the Gulf of Mexico, Travis cranked the drag and the line parted. 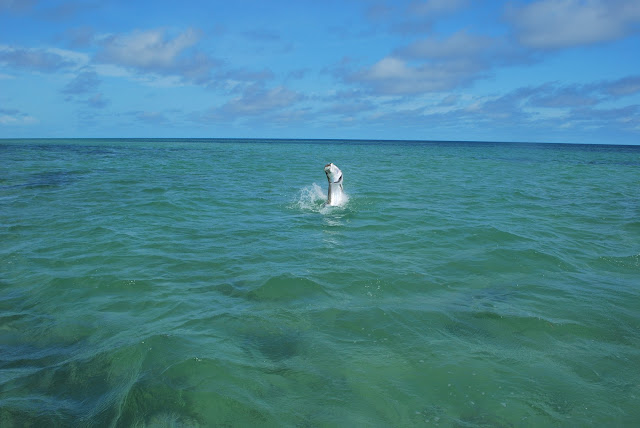 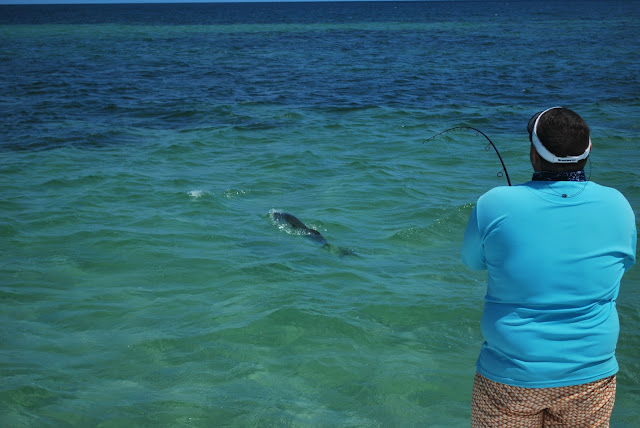