I fished with Carlos from Fort Myers this morning. We started early for some pre-dawn tarpon fishing. Carlos jumped three tarpon and landed an Atlantic Sharpnose shark. We then moved to the flats to look for permit and bonefish.

Within a few minutes we found a big permit slowly working the flat. After a couple of casts in the wind the crab found it's mark. After a fifteen minute fight the permit was boat side for some photos.

As we worked down the flat we spotted a school of bonefish and Carlos quickly laid a cast near the school. One of the fish saw the jig tipped with a shrimp and chased after it like he hadn't eaten in a week. A few minutes later and a nice four pound bonefish was in the boat.

We went back around to fish the flat again and right away saw a pair of permit. One of the fish chased the bonefish jig and grabbed it on the drop. Another fifteen minute tussle and Carlos's second permit of the day was in the boat.

We checked a few spots to try for a tarpon to complete the Key West slam but none were found.

Another great day of Key West fishing in the adverse conditions. 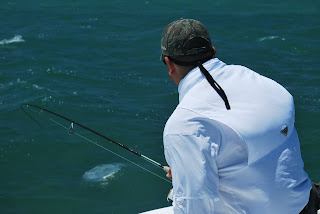 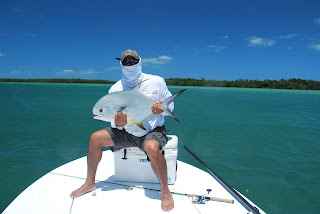 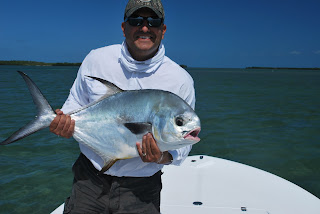