Fished with Rob and his wife JoAnne from New Jersey this morning. We had a great morning of tarpon fishing out west of Key West. Jumped two tarpon on plugs and another two on crabs. The last one was on for about 15 minutes and was close to boat when the line parted. There was a lot of sargasso weeds where we were fishing and the fish may have landed on the line a few times. In any event the line was severely chaffed which caused the break off.

The best part of the trip was when a tarpon grabbed the plug, that JoAanne was throwing, next to the boat. "What do I do? What do I do?" As she held on for the few moments the tarpon was hooked and freed itself when it took to air. It was great moment for me as a guide to have someone who rarely fishes have that experience. It was priceless.

The fifth tarpon of the day came when we found a small school of babies on a flat and Rob threw a crab at them and one of them grabbed the small float. I really need to start putting hooks in those things.

It was a great day on the water with a fantastic couple. Thanks guys and I can't wait until next time. 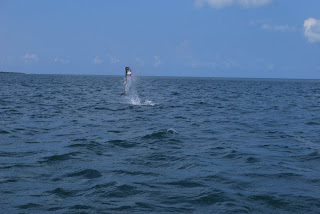