Fished with John and Susan from Orlando this morning. It was Susan's first time fishing so I anchored in a channel in hopes of a tarpon for John while I worked with Susan on casting a spinning rod. Susan took to it pretty quick and was casting like pro after a few practice casts. After several small snappers that wouldn't stay on she finally caught a nice Crevalle Jack for her first fish.

In the meantime John was casting a plug and I had a pinfish out the back. A six foot spinner shark grabbed the pinfish and went racing down the channel until it did it's spinning jump, hence it's name, and broke off.

We spent the last part of the trip on the flats where John caught two permit and had another eat the crab off the hook. We saw a lot of good size barracudas while John was fighting his permit and a few blacktip sharks. 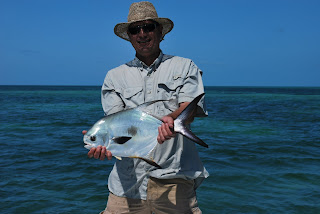 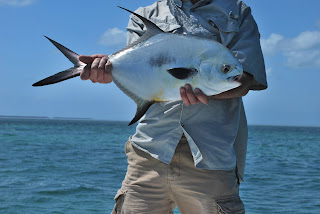